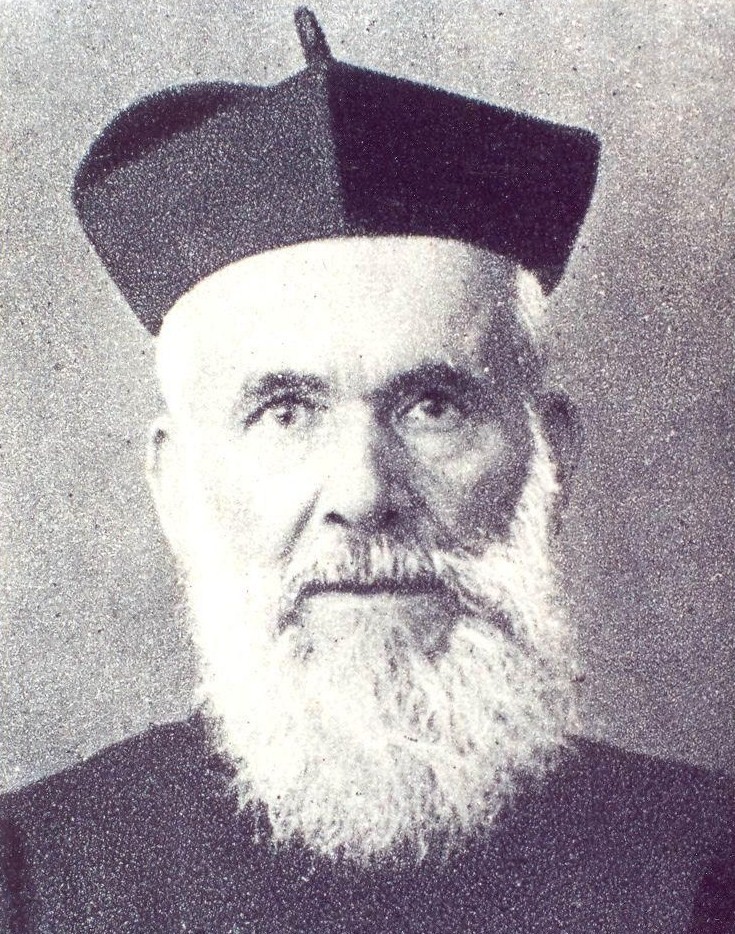 Henri Lammens is born on the 1st of July 1862 in Ghent as the child of wage worker Bernardus Lammens and Joanna Livina Vandeneste. His father is an alcoholic who leaves his wife and their six other children during Lammens’ childhood. Despite his modest background, one of Lammens’ primary school teachers in Ghent notices his apparent brightness and gets him admitted to the Jesuit-run Apostolic School in Turnhout, a breeding ground for missionaries. Lammens quickly lives up to the schools’ reputation. Just fifteen years old, he leaves for Lebanon in March 1877, where he enters into the Societas Jesu on 23 July 1878. Following its resurrection in 1814, this order was present in the region since 1831. Lammens spends 1878 as a pupil of the Jesuit College of Beirut and fulfils his noviciate in a convent north of Beirut during the next two years. In 1881, he returns to Mount Lebanon’s capital to study rhetoric at the Jesuit Université Saint Joseph (usj), progressing to a study in philosophy in 1883, which he completes two years later. During these years, Lammens acquires a profound knowledge of the Arabic language, which he subsequently goes on to teach at the Jesuit College between 1886 and 1891. These years see his first publications, mainly of a philological nature, the most prolific of which is a textbook for French students of Arabic (1891).After ending his teaching assignment he completes his Jesuit formation by studying theology in Beirut, Wales (1891-1893) and Leuven (1895) and, finally, spending his last year of training in Vienna in 1896. Now a full Jesuit Father, he moves back to Beirut, where he fulfils various administrative tasks in the College.

During his final years of Jesuit training, Lammens exhibits an increasing scholarly activity. In 1894, he publishes a study on the seventh-century Umayyad poet Al-Akhtal, his first feat as an historian of Islam. In the following years, however, his budding activity in the study of Islamic history is eclipsed by other scholarly endeavours. Between 1897 and 1907 Lammens, like many contemporary Orientalist scholars, undertakes numerous travels throughout Syria, Lebanon and Palestine. The articles he publishes on these trips show him studyingthe history and religion of indigenous communities like the Alawis and Yazidi and indulging in amateur archaeological research on the region’s Early Christian and Crusader history, illustrating Lammens’ wide-ranging fascination for – especially Christian – Middle-Eastern history and society. In cooperation with the Brussels Cinquantenaire museum’s director Franz Cumont and with subsidies from the Belgian government, moreover, he also (illegally) helps transfer a series of archaeological artefacts from Syria to Belgium.

Simultaneously, he regularly publishes on contemporary Middle-Eastern Christianity in French Catholic journals and in the Jesuit-run Arabic periodicals Al-Machriq and Al-Bachir. In these articles Lammens, as a member of a Catholic order closely associated with France’s long standing claim to being the ‘protector’ of Catholics in the Ottoman Empire, strongly supports French regional ambitions, regularly criticising the actions of France’s European rivals for influence over local Christian groups. To Lammens, France best guarantees thes uccess of the Catholic Church’s activities in the region that, under the influence of the contemporary Unionism-movement, works towards reuniting local Christians with Catholicism. By scorning the internal politics and spiritual qualities of indigenous Churches, he supports the Unionist campaign.

The mid-1900s mark a gradual transition in Lammens’ activities. In 1903, after editing Al-Bachir for three years, he is appointed to lecture geography and history(1904) at the new Faculté Orientale of the usj. From his new focus on Islamic history resulting from these appointments follows a series of articles on the first two Umayyad caliphs, Mu‘Awiyah I and Yazid I. He thus reconnects with his earlier work on al-Akthal, a contemporary of both rulers. Just like in his 1894 study, he devotes a lot of attention to the role Christians in his opinion played in the Umayyad Caliphate. To Lammens the Umayyads were able to build a strong empire because of their tolerance of and interactions with their Christian subjects. In this way, he rehabilitates a dynasty which had been negatively looked upon in traditional Islamic historiography, now sharply criticising their historical rivals, the Abbasids and ‘Alids.

Around 1910, Lammens shifts his focus to the earliest period of Islamic history. In works like Fātima et les filles de Mahomet (1912)he attempts a re-evaluation of the life of the Prophet and other key figures of early Islam. In these studies, Lammens not only stresses the inherently political character he sees Islam as having, a sentiment also expressed by other contemporary scholars. Replacing the traditionally positive depictions of the Prophet’s life by exceedingly negative images, he also marks himself off as a vigorously Catholic Orientalist, severely criticising Islam and its protagonists. Indeed, he not only targets historical Islam. Throughout his career, he publishes polemical articles on the politico-religious situation of contemporary Islam, consistently praising Christian and Western influences on the Islamic world. Lammens’ Catholic bias corresponds with the intellectual circles in which he moves. Already before working with him at the Faculté Orientale, he maintains good relations with fellow Jesuit and scholar Louis Cheikho, an indigenous Middle-Eastern Catholic who equally stresses the importance of Christianity in pre- and early Islamic history. In 1910, moreover, after spending three years at the Jesuit College in Cairo, he is appointed to a professorship in Arabic at the papal Institutum Biblicum in Rome, where he works in an atmosphere of Catholic apologetics.

His virulent criticism of both historical and contemporary Islam regularly exposes Lammens– in any case known for his jovial but stubborn and quick-tempered character – to criticism and polemics. In 1913, the German Orientalist Carl Heinrich Becker denounces his work as being uncritical and overly informed by his Catholic beliefs, while the Arab historian Muhammad Kurd ‘Ali characterises him as one of Muslim Arabs’ worst enemies. But in spite of this, Lammens’ qualities as a scholar are seldom entirely put into question. Although criticising the religiously inspired conclusions he draws, a lot of scholars also praise him for the new, ‘hypercritical’ way in which he approaches the source material of early Islamic history. Many of them in any case share with Lammens a commitment to European imperialism and a belief in the superiority of Western civilization. Maintaining numerous correspondences, participating in international congresses and writing around eighty articles for the international Encyclopedia of Islam(1913-1936) project, Lammens actively contributes to the formation of an international community for the study of Islam and Arabic.

At the outbreak of the First World War, Lammens moves from Rome to Jesuit Colleges in Cairo and Alexandria, staying there until 1919. Learning of German war crimes in Belgium, his writings show a clearup surge of Belgian nationalism. Meanwhile, he continues work on his study of the pre-Islamic Arabian Peninsula, which he started during his stay in Rome. He now sees pre-Islamic Arab culture and religion as a key to a deeper understanding of Islam and its Prophet. After already publishing a study on the nomadic cultures of the pre-Islamic Hejaz in 1914, he focuses on the cities of Tāifand Mecca. Especially his work on Mecca, in which he not only again attests to negative views on Islam but also characterises pre-Islamic Mecca as a ‘trade republic’, will prove to be influential to other historians. Because of the war both works only appear in the 1920s. His contemporary plan of writing a biography of the Prophet Muhammad, moreover, is boycotted by his clerical superiors because of his staunchly anti-Islamic reputation.

In 1919 Lammens returns to the usj to teach history and becomes involved in supporting the French colonial project in Syria and Lebanon, which France acquires as mandate territories in 1920. In doing so, he is motivated by his ideas on a historical Syrian nation, which he started developing in the early 1900s. These are already reflected in his work on the Umayyads, which he characterises as a Syrian dynasty. To him, Greater Syria (present-day Syria, Lebanon, Palestine and Jordan) is an authentic nation with a distinct territory and people. In 1921, strongly stimulated by his connections in the French mandate government, he publishes La Syrie, a popularising overview of the history of the Syrian ‘nation’ in which he stresses the positive effects of the West and especially France on its historical development and minimises the role played by Islam. He also devotes special attention to Christian Lebanon, seeing it as an historical sanctuary for the ‘authentic’ – to Lammens quintessentially Christian – Syrian nation.

Over the course of the 1920s Lammens’ health starts to decline. In 1926, he publishes a synthesis of the history and beliefs and institutions of Islam, one of his last major works. Perhaps due to its less polemical tone and a relative absence of anti-Islamic sentiments the book is widely acclaimed, earning him the Prix Goblet d'Alviella of the Belgian Académie Royale in 1931. In 1927, Lammens had already been named commander in the Belgian Ordre de Léopold. Despite spending the majority of his career in the Middle East and strongly supporting French ambitions in the region he retains – certainly in his own eyes – an identity as a Belgian scholar. In the early 1930s his health definitively goes downhill. Struck by progressive paralysis, he dies in Beirut on 23 April 1937.